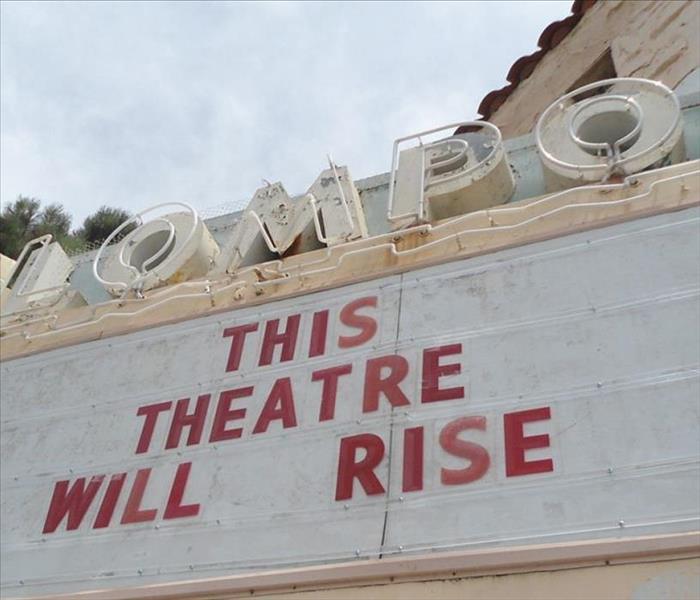 The Lompoc theater has stood proudly in Lompoc since 1927.  It was once the home to a wide variety of exciting musical events from symphonies to rock concerts, live theater events from vaudeville to ballet, and to cinema from small indies to Hollywood blockbusters.  But, sadly, the theaters' glory days were behind her and time has not been kind to the theater.

Fortunately, the community has rallied with the intention of bringing the historic theater back to life.  A committee was put together to raise funds to try to restore the old theater.  The committee thought that it would be ideal for potential donors to see the interior of the theater so that they could better be inspired to give.  The only problem was that the years of neglect had left the theater with serious issues from bird feces as well as a substantial amount of mold.  It was unsafe for the public to enter.

A call was made to SERVPRO of Santa Barbara and Santa Ynez.  It was a lot of tough work but SERVPRO was able to remove and sanitize all of the areas affected by the pigeon poop.  Then the highly trained professionals got started on the mold and before long, that was gone as well.  The theater was able to hold a 90th anniversary celebration fundraiser in which the public could safely step inside to view the jewel of downtown Lompoc.

SERVPRO of Santa Barbara and Santa Ynez is locally owned and operated.  We live here in the community with you and are thrilled to have been able to our part in helping restore a historic building.